Please note: Although we have received permission to use Elliott Smith’s music in Heaven Adores You and Elliott’s sister Ashley Welch appears on-camera, the producers of this film note that Elliott Smith’s family as a whole neither endorses or supports this project. As such, the producers respectfully ask that representatives of the media do not report or infer otherwise.

Heaven Adores You is an intimate, meditative inquiry into the life and music of Elliott Smith (1969-2003). By threading the music of Elliott Smith through the dense, yet often isolating landscapes of the three major cities he lived in — Portland, New York City, Los Angeles — Heaven Adores You presents a visual journey and an earnest review of the singer’s prolific songwriting and the impact it continues to have on fans, friends, and fellow musicians.

Heaven Adores You is an intimate, meditative inquiry into the life and music of Elliott Smith. In this documentary portrait, we journey through the life of American singer and songwriter Steven Paul “Elliott” Smith, a musician whose rise to prominence in the 1990s and early 2000s was cut short by his untimely death at the age of 34 in 2003.

The film opens in 1998 — a year in which Elliott receives an Oscar nomination for his song “Miss Misery” for the Gus Van Sant film “Good Will Hunting,” and his album “XO” receives mainstream airplay — an interviewer from Dutch TV inquires about his recent declaration that he’d never be a rock star. Elliott thoughtfully replies, “I’m the wrong kind of person to be really big and famous…”

What kind of person was Elliott Smith? Since his death in 2003, many media-makers have attempted to tell the story of his creative “sad-sack” genius, often through the lens of struggle, heartache and addiction. Director Nickolas Rossi employs a different lens, placing music center-stage, creating a framework for Elliott to narrate the story of his life himself, through the filter of recorded conversations and interviews, with support from friends along the way. With great care, Rossi expertly weaves together 30+ interviews to create an intimate and personal history like never seen before.

Beginning in Portland, we’re treated to Rossi’s stunning cinematography with a gorgeous aerial view of the lush landscape. Photographer and friend Autumn de Wilde and official archivist Larry Crane discuss how the Oscar nomination affected Elliott, with Autumn noting, “I wanted more people to hear his music … but it changed a lot of things for him.”

The film moves to a sombre day — Elliott’s death on October 21, 2003 — and we see shots of the Elliott Smith Memorial Wall in the Silver Lake neighborhood of Los Angeles, CA. Music video director Ross Harris discusses his reaction to the news of his friend and collaborator’s death.

Rewind. The year is 1997 and Elliott is in Santa Monica, CA being interviewed by KCRW’s Chris Douridas. Douridas inquires about Elliott’s childhood and is surprised to discover he grew up in Dallas. Smith’s sister Ashley Welch discusses her experiences with Smith when they were children, set against a montage of photographs from their childhoods. Smith’s childhood friend Steve Pickering also shares stories from their school days.

We meet Tony Lash, friend and bandmate, who discusses meeting Elliott at Lincoln High School in downtown Portland. It’s here, in high school, that Lash and Smith began collaborating in music. Post-university, Lash and Smith form the band Heatmiser which becomes a major part of the Portland music scene in the 1990s. Musicians Pete Krebs, Sean Croghan, and others involved with the Portland scene at the time, discuss the era and the subsequent discovery of Smith’s solo work, which was quietly recorded on a 4-track and would become the basis for “Roman Candle.” Slim Moon, from the record label Kill Rock Stars, and Margaret Mittleman, soon to be Smith’s manager, discuss seeing him perform solo, especially significant given the period, which favored loud and often-times political rock; acoustic sets were considered “nerdy” and “uncool.”

We move into 1995 and Ross Harris discusses his experience directing Elliott in the video, “Coming Up Roses,” a single from Elliott’s second self-titled release. It’s a busy period for Smith as he balances duties with his band Heatmiser and his emerging success as a solo artist. Lash and recording engineer Rob Schnapf discuss tensions that surfaced with Heatmiser members as they recorded what would ultimately be their last album together, “Mic City Sons.” Of Smith’s solo career at the time, Sean Croghan notes, it went to “big all of a sudden.”

1997 sees the release of Smith’s third album “either/or” and James Clark, a guitar tech who would work on a future tour, remarks, “if you didn’t know you were standing next to genius, then you just aren’t paying attention.” Larry Crane and Elliott open Jackpot! Recording Studio and we see images of the two of them painting and setting up the space. Crane and Elliott’s former girlfriend Joanna Bolme and collaborator discuss the era.

Elliott moves to Brooklyn, NY. Friends such as Autumn de Wilde discuss having him in New York and the impact it had on them. Elliott’s fourth album is released in 1998, “XO.” Jon Brion and Larry Crane discuss the song “Waltz #1” with Brion noting, “there were a couple of times he full-on freaked me out as a musician.” Friend and publicist Dorien Garry suggests that he was not well during this period, drinking heavily and calling in the middle of the night. Friends discuss their “intervention.” We re-visit Elliott’s Oscar nomination for “Miss Misery.” Bolme, Crane and Smith himself talk about the nomination and subsequent ceremony.

Next we go on the XO tour with Elliott and his crew and are treated to several stories and anecdotes that paint a picture of an Elliott Smith who’s funny and silly – not a common understanding of the man. Elliott moves to Los Angeles post-tour.

Jon Brion, Largo club-owner Mark Flanagan and Elliott’s manager Margaret Mittleman discuss the era candidly and describe it as a “golden period.” His fifth release, “Figure 8” comes out and the world is introduced to the now-infamous Elliott Smith wall at Solutions! in the Silver Lake area of the city by “Son of Sam” video director, Autumn de Wilde. Mittleman, Brion, Flanagan, Garry, Lash and others discuss their experiences with Elliott’s substance abuse and attempted recovery in the time leading up to his death from two stab-wounds to the chest.

The posthumous release, “From a Basement on the Hill,” Elliott’s sixth album completed by Joanna Bolme and Rob Schnapf after his death, is discussed. The documentary wraps with footage from “No Name #1” – a series of benefit shows that took place over four cities in 2013 and was put together by Elliott’s sister Ashley Welsh. The track “Happiness” is featured, sung by both musicians on-stage, and folks in the crowd – it’s a magical moment for all involved.

At the conclusion of Heaven Adores You, we have a rich view of an incredible and accomplished talent, a view that places music at the center of Elliott Smith’s legacy. Elliott said it best himself, “the less I think about it, the happier I am. I don’t really care where I fit into anything, or if there’s anything to fit into to. It’s just, I like music, you know? That’s the thing. It’s really uncomplicated.” 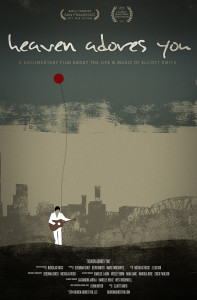